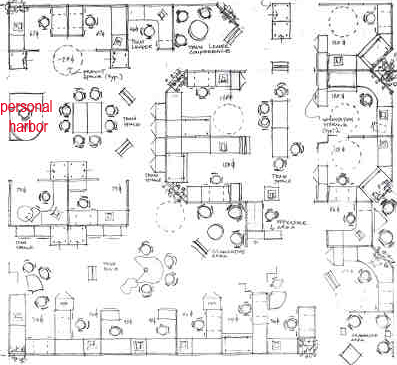 A discussion I had yesterday with a colleague of mine about the "office of the future" brought back memories of the Fisher Price Team Building project that I was fortunate to have been involved in way back in 1993. The project team consisted of the Architect, Construction Manager, Owner and Furniture Dealer. At the time I headed up the Design Department for the Furniture Dealer and we were charged with planning the interiors for this truly innovative building.

As part of the initial research and planning we mocked up a team area for the Juvenile Products Team. Part of the plan was a new product at the time called the Personal Harbor, which can be seen in one of my original development sketches at left. The Personal Harbor was installed as part of the team mockup for the highest level position going into the building, a Sr. Vice President. As the story goes, the VP closed the sliding door for privacy and when he tried to open it, it would not open, he was trapped. Needless to say, this product was not used in the final building space plan design. 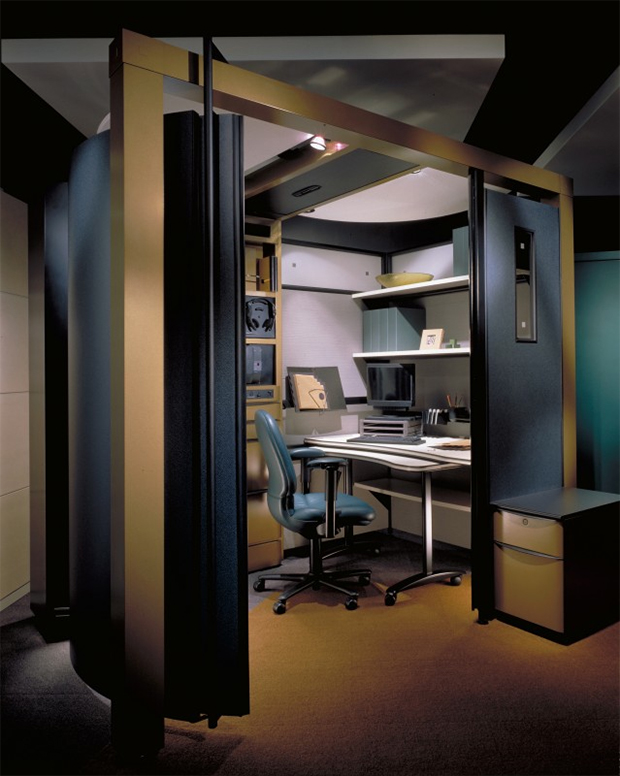 The Personal Harbor was developed using video taped studies to determine how people work rather than the usual programming process that involves interviewing people to understand their workplace needs. The result was a self-contained 48 square foot workspace, meeting ADA guidelines. The workspace included a sliding curved door for privacy, ceiling, lighting, airflow and it was relatively easy to relocate.

When I mentioned this product to my colleague, who is a bit younger than me, he had not heard of it. And as I continued to think about it, I realized I had not heard of it since that project. I decided to look it up on the web and I found the above photo included in the Steelcase Timeline stating the Personal Harbor had won the 1995 Gold Industrial Design Excellence Award (IDEA).

Looking at this image today, I wonder if it might be time to take another look at the Personal Harbor as it might fit into the "office of the future".